What Is The Bitcoin Halving And What Does It Mean For Bitcoin Price?

What is the Bitcoin halving?

Bitcoin is limited to its supply – only 21 million Bitcoin will ever be created to exist. This sets Bitcoin apart from national currencies which can create an unlimited supply; making it a deflationary asset.

In order to ‘create’ Bitcoin tokens, Bitcoin miners use computing devices to solve an algorithmic puzzle which rewards them with Bitcoin tokens.

The first sum of Bitcoin rewarded, known as the block reward,  was 50 Bitcoin (BTC)and could be done using a laptop. At that time, Bitcoin was not worth a lot.

Now, mining Bitcoin is a much more involved process which requires specialized equipment and a lot of energy and electricity. The block reward is also no longer 50 BTC – at the moment, it is only 12.5 BTC.

So why the change?

Every time 210,000 blocks of Bitcoin are mined, the block reward is halved. This is known as “the Bitcoin Halving”. This halving has happened twice. 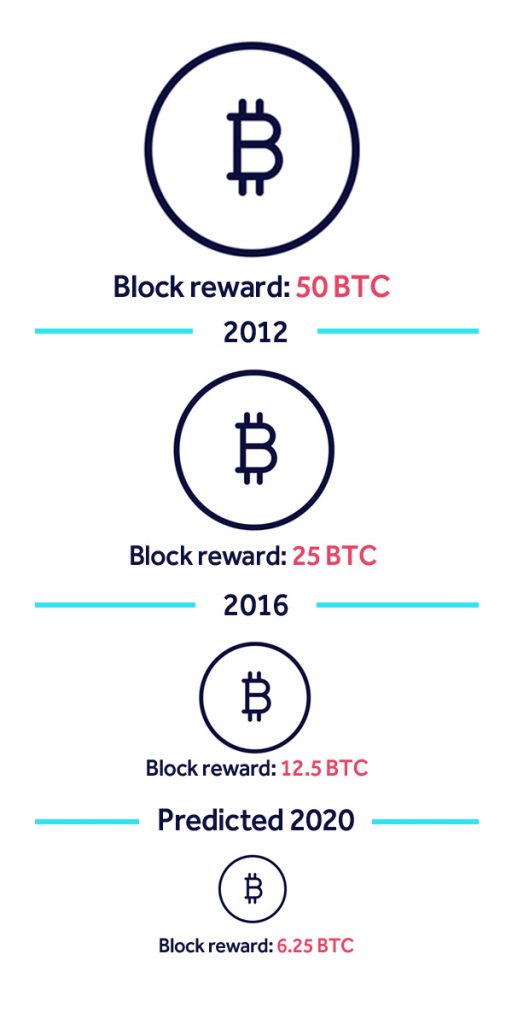 When is the next Bitcoin halving?

The first time was in November of 2012 when the block reward was sliced from 50 BTC to 25 BTC per block.

The second Bitcoin halving was in July of 2016 when the reward went from 25 BTC to the current reward of 12.5 BTC per block.

The next halving is predicted to happen around May 2020 and will see the reward fall to 6.25 BTC per block. This prediction is based on how many blocks need to be mined until the next halving and the amount of time it takes for each block to be mined.

Why is there a Bitcoin halving?

If the asset has a finite number of units, why does creating it then need to halve the reward if they will all be in circulation one day anyway?

Basically, the Bitcoin halving slows the production of Bitcoin tokens which helps keep the value. If too many tokens existed all at once, each Bitcoin would have little value because there would be too many available without enough time for them to be adopted.

“The main reason why this is done is to keep inflation under control. One of the major faults of traditional, “fiat”, currencies controlled by central banks is that the banks can print as much of the currency as they want, and if they print too much, the laws of supply and demand ensure that the value of the currency starts dropping quickly.  Bitcoin, on the other hand, is intended to simulate a commodity, like gold. There is only a limited amount of gold in the world, and with every gram of gold that is mined, the gold that still remains becomes harder and harder to extract. As a result of this limited supply, gold has maintained its value as an international medium of exchange and store of value for over six thousand years, and the hope is that Bitcoin will do the same.”

Will the halving affect Bitcoin price?

In the past, the Bitcoin halving has had a significant impact on the price of Bitcoin. One of the prominent reasons for this points to the theory of supply and demand. As fewer Bitcoin tokens are generated, the value of those tokens increases. The scarcity of Bitcoin then translates to value and the price rises.

After the two halvings, Bitcoin price surged about a year later. The first halving took place in 2012, and 2013 saw a bull run spike when Bitcoin reached $1000 – which was an unprecedented high.

Although two spikes might not be enough evidence to show that Bitcoin surges after a Bitcoin halving, the timing of the major bull runs is worth noting. If the next halving is going to follow the trend, then we will see the price of the cryptocurrency skyrocket.

How is Bitcoin poised right now?

Over the past month, Bitcoin had been gaining steadily to see growth from $6815 USD to kiss $10,000 USD. Yesterday, however Bitcoin fell nearly 10% as investors sold off and sentiment shook ahead of the halving. As volatility remains turbulent, the token sees a minor rise in price with a slim 1.96% increase in daily trading. 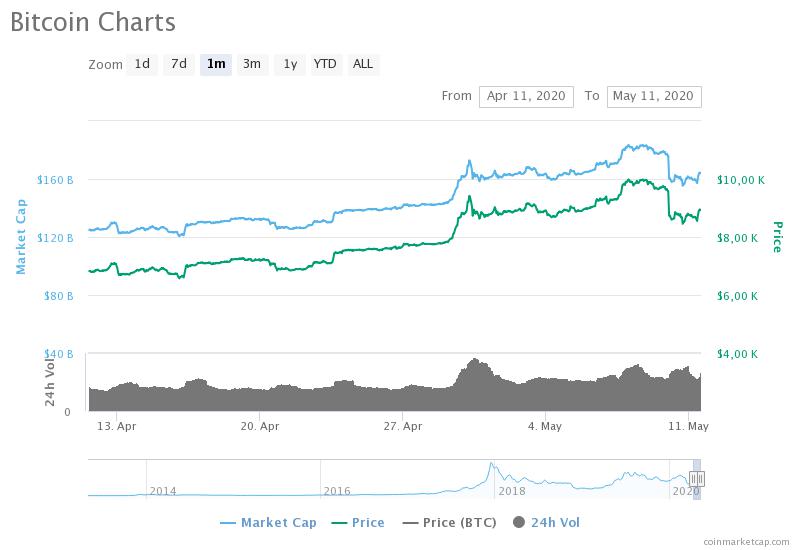 Following the halving, Bitcoin might see a spike over time to reach unprecedented figures. Analysts, cryptocurrency enthusiasts and prominent Bitcoin miners are bullish about the next few months in the market predicting a surge in price.