The top three Bitcoin mining regions in the world

Over the last two years, Bitcoin has steadily risen in value and popularity with investors looking to the digital currency as an alternative asset. With more users entering the market, and with long-term investors holding onto their Bitcoin there is a growing demand for tokens with an increasingly limited supply.

Bitcoin is capped to a limit of 21 million Bitcoin that will ever be created. Currently, there are still tokens that can be mined until that hard cap is reached – done by Bitcoin mining – and creating new Bitcoin is becoming increasingly more difficult.

What is Bitcoin mining?

The creation of new Bitcoin tokens is referred to as Bitcoin mining. It is the process of using computing power to solve complex algorithmic puzzles in order to verify transactions on the network. Every time a new solution is solved, the network generates a new bit, creating a new block of data on the blockchain. Bitcoin mining has become extremely energy-intensive and miners are incentivized to continue mining by the reward of Bitcoin for each block mined. Approximately four years, the reward for Bitcoin mining is halved to regulate the supply in the industry.

Initially, Bitcoin mining was easy to do and miners could use their personal computers to generate new blocks. Now, specific machinery as well as air conditioning to regulate the power is required for miners. As Bitcoin mining has scaled up, there has been increased concerns related to the enormous power required to verify transactions and mine Bitcoin to maintain operations. The industry’s energy consumption hit a record-breaking peak in January 2022 and key players are looking at ways to minimise the environmental cost and maximise power efficiency to mine Bitcoin. 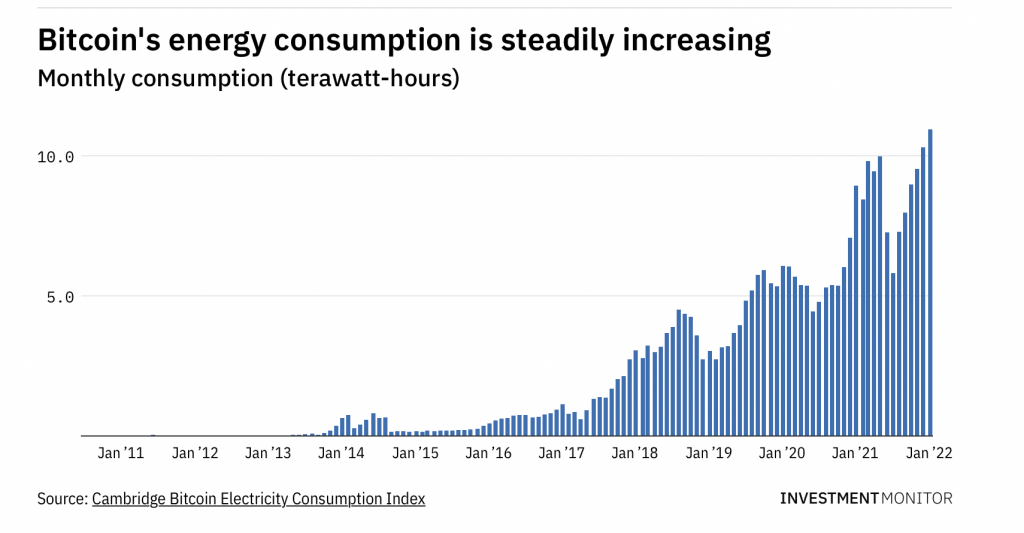 Where is Bitcoin mining most prevalent in the world?

Over the past two years, there has been a significant shift in the dominant regions of Bitcoin mining. China, before July 2021, was a key country in the industry, making a massive portion of Bitcoin mining. Following a blanket ban on Bitcoin and cryptocurrencies in China, the miners in the region were forced to move operations. 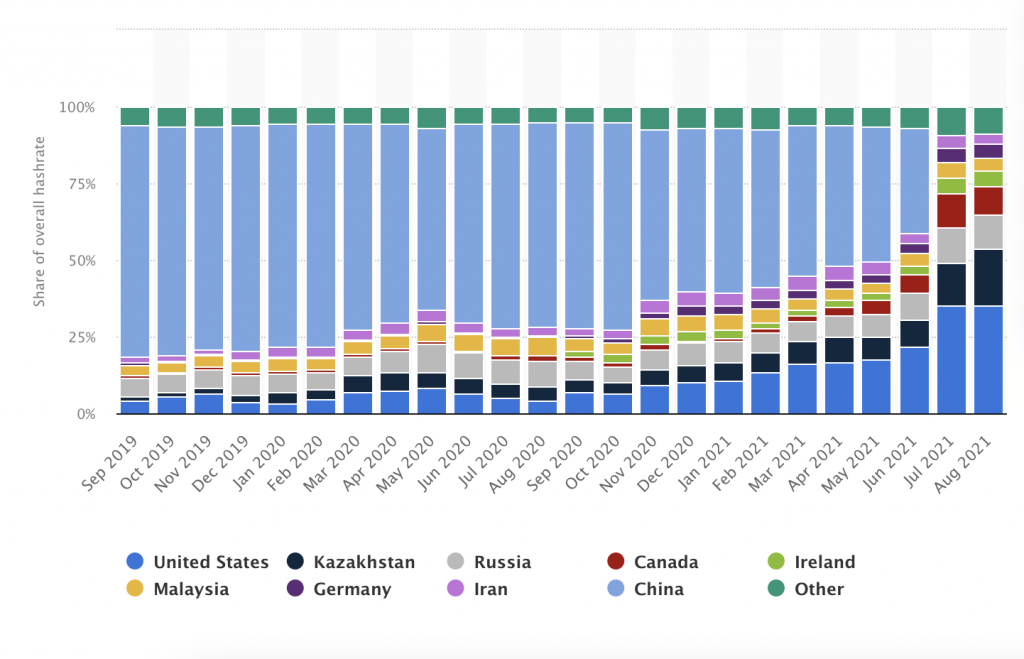 Other countries have banned the mining of Bitcoin, including Algeria, Egypt, Iraq, Morocco, Oman, and Tunisia. This leaves miners to move their operations to key areas where the industry is allowed – and encouraged. Since Bitcoin was banned in China, the United States quickly stepped in as the global leader for Bitcoin mining. This was driven by the country’s acceptance towards the industry as well as access to renawable energy sources and low energy prices. Texas, in particular, is a pro-cryptpocurrency State with a power grid that has been deregulated and offers spot pricing. This means miners can choose and change energy providers and look for the most sustainable and cost-effective competitor in the market and take advantage of flexibilility.

Stephen McKeon, an associate professor of finance at the University of Oregon weighed in on the matter of Bitcoin energy costs:

“There are two main inputs to production for Bitcoin mining: hardware and energy. The hardware can be used anywhere with an internet connection, so the best regions are those with the lowest energy costs. In the US this tends to be regions such as the Pacific Northwest, where renewables such as hydroelectricity are the dominant components in the generation mix.”

Will Kazakhstan remain as the second global leader in Bitcoin mining?

While Texas promotes sustainable energy, Kazakhstan stands as a region that offers cheap coal power. The rise in mining activity in the country has been critized owing to a number of factors, inclduing the pollutive energy and the riots and political uncertainty in the area. The country has a good environment for Bitcoin mining in terms of vast areas of space for machiner, low energy costs, and favourable climates, but internet shutdowns and hefty taxation on mining might drive the miners to look at alternative areas for their work.

Even more controversial still, Russia has remained one of the core countries for Bitcoin mining operations. At the beginning of the year, the central bank hinted that it might clamp down on cryptocurrency in the country, but the stance seems to have softened.

At the time of writing, Russia has invaded Ukraine and the world has slapped sanctions on the country, locking Russia out of global economic activity. Reports from Bloomberg state that Russia might rely even more on Bitcoin mining to get access to some form of liquidity in the country. Russian president Vladmir Putin has encouraged mining in the region, despite the bank’s earlier proposal to ban mining. On this, David Carlisle, director of Policy and Regulatory Affairs at blockchain analytics firm Elliptic commented:

“It wouldn’t be a stretch for the Russian government or certain sanctioned entities to look to mining as a way to get access to Bitcoin. They could be translated to goods and services or just hard cash.”