Report: When is the best time to buy cryptocurrency?

The research arm of Well Fargo Wealth and Investment Management has reported on the opportunity cryptocurrencies hold as an investment opportunity. Likening cryptocurrency to the early days of the World Wide Web, the report considers the viability of cryptocurrency for its investors.

The report, titled “Cryptocurrencies — Too early or too late?” digs into the adoption of digital assets over the past few years and what the rise of the cryptocurrency industry – at such a rapid rate – might mean for investors. According to the Wells Fargo Investment Institute report, cryptocurrencies can be considered viable as investment opportunities, “though they remain in the early stages of their investment evolution.”

Is it too late to buy Bitcoin and other cryptocurrencies?

The report states that cryptocurrency is still in the early stage of investment, and that the market and industry are still developing and establishing, suggesting that there is no urgency that investors enter the scene. The report notes that the research team” [understands] the “too late to invest” argument but [does] not subscribe to it.”  The rationale behind this is that the first few years of cryptocurrency were highly speculative and started at such low price points that comparing the value to the token now to back then might offer misleading information to new investors. The research report also points out that the space is still relatively new in the world of finance and investment, with most cryptocurrencies on the scene not older than five years old.

Comparing Bitcoin to gold, Wells notes that there is still volatility that will reduce as the asset matures.

“We see cryptocurrency in the “early, but not too early” investment stage.” This, as per the Wells Fargo, report comes from the idea that Bitcoin and other cryptocurrencies are following similar trends in terms of adoption to that of the internet. In the early and mid 90s, the internet saw a rapid rising number with new iterations and criticism.

Looking at the trajectory of technological innovation over the years, we see a trend of rapid increases, with continued sustained growth. If cryptocurrency is to follow in the same trend as the internet, it’s set to continue to grow with increasing sustained health and reduced volatility over the next decade or so. 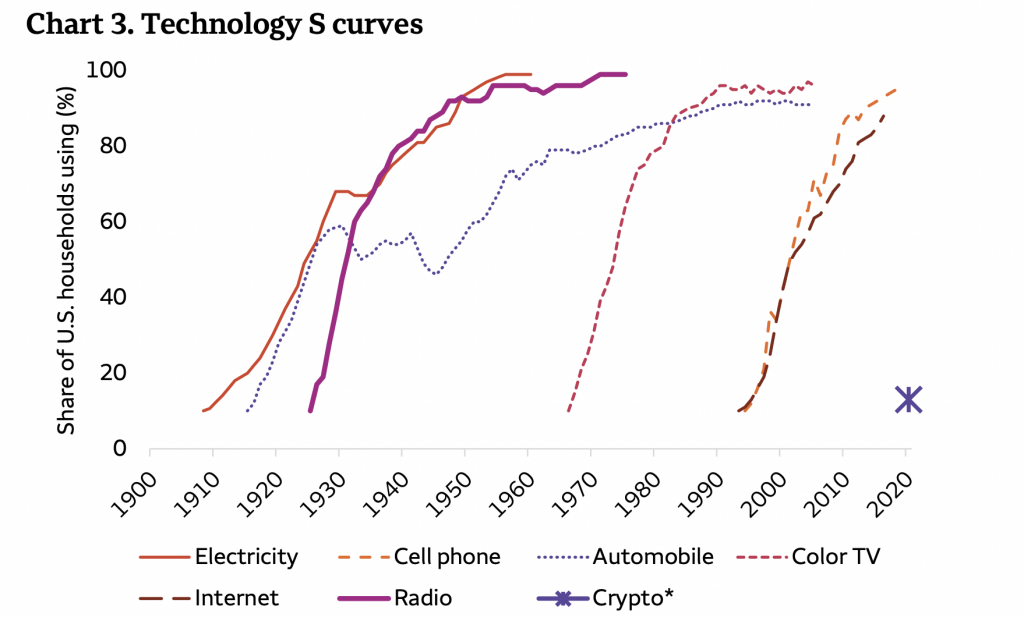 Like the internet, crypto has faced claims that it is a bubble and accelerated exponential growth in users, investors, traders and holders over the past few years. The report also noted:

“If this trend continues, cryptocurrencies could soon exit the early adoption phase and enter an inflection point of hyper-adoption, similar to other technologies. There is a point where adoption rates begin to rise and do not look back […] Precise numbers aside, there is no doubt that global cryptocurrency adoption is rising, and could soon hit a hyper-inflection point.”

Buying Bitcoin and cryptocurrency as an asset without regulation might prove one of the issues of the timing of crypto investment. If regulations are put in place to help facilitate crypto investment, rather than inhibit the industry, the market would shift towards a stronger investment with less risk over time. While cryptocurrencies still pose massive potential for investment, Wells notes that if regulatory roadblocks are revised, there might be room for better quality and better protected investment opportunities.

Buying the ‘right’ cryptocurrency when the industry is still fairly nascent is also possibly problematic for long-term investment. Buying digital assets and holding comes hand-in-hand with keeping eyes on the market for possible emerging cryptocurrencies that will stand the test of time.