What would you have made if you held McAfee’s ‘Coin of the Day’ to date? 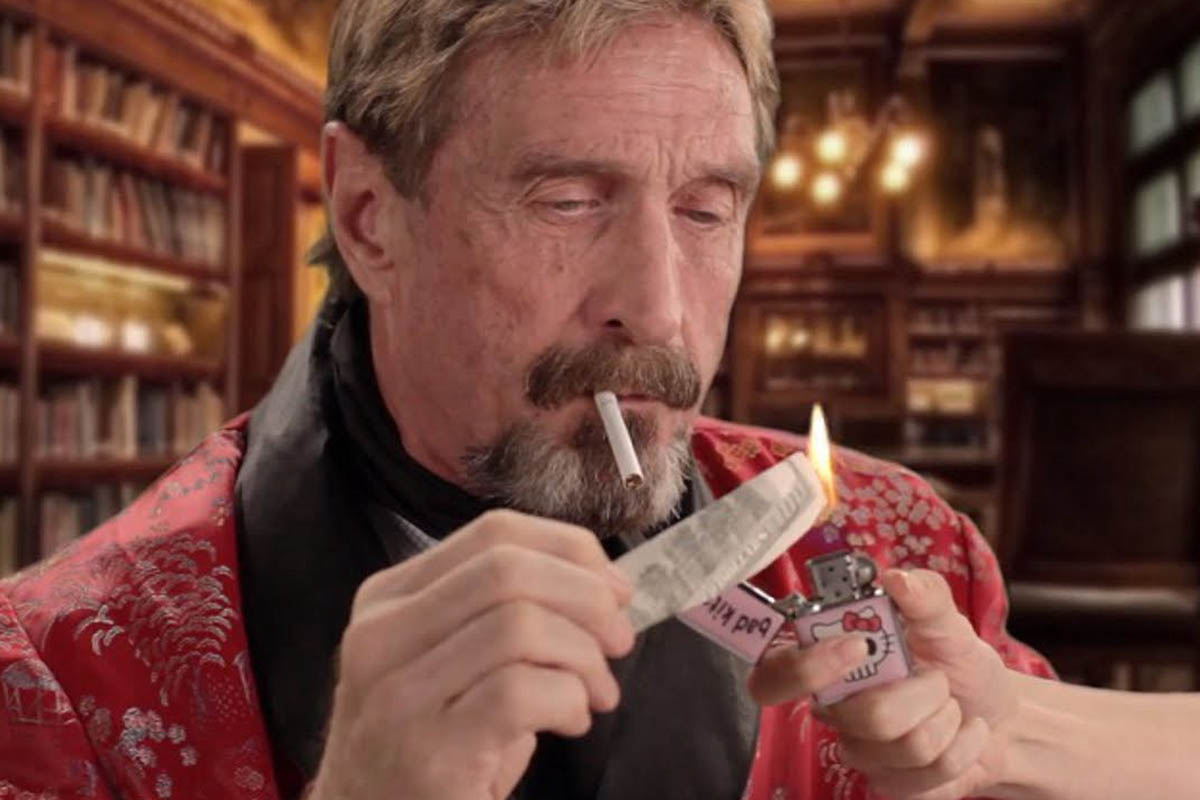 In December of 2017, John McAfee – the name behind the antivirus software – kicked off a series of ‘Coin of the Day’ profiles – highlighting several cryptocurrencies thought to be unappreciated or undervalued.

While McAfee shifted his formula to cover a ‘Coin of the Week’ midway through, traders continued to jump on his highlights – using the opportunity to ride a profit wave through a subsequent pump and dump.

While McAfee’s ‘Coin’ profiles are usually thought to be little more than that, an interesting question remains – how much money could you have made (or lost) if you’d held McAfee’s picks to date?

Here, we’ll take the first ten Coin of the Day – and later Coin of the Week profiles – and explore not only what your return on investment might have been, but further whether any of these cryptocurrencies rebounded from the ‘McAfee effect’.

ELECTRONEUM – The first of my daily coin reports: pic.twitter.com/sKf9WNirot

Electronuem – a cryptocurrency perhaps best known for its implementation of simulated mobile mining – woke up on December 21st with a value of $0.07 USD. Following McAfee’s tweet, the cryptocurrency rallied to a high of $0.12 USD.

Thereafter, Electronuem soared to $0.19 USD on January 7th, before collapsing and limping home to $0.02 USD at the time of publication.

Perhaps the first occasion where the McAfee effect came into play, Burst began trading at $0.04 USD on December 22, and post-tweet rallied to $0.05 USD. The cryptocurrency subsequently climbed to $0.08 USD the following day, reached a high of $0.11 on January 7th, and then gradually collapsed to $0.02 by press time.

Coin of the day: Digibyte (DGB). Using a Blockchain which is 40 times faster than Bitcoin and having one of the most decentralized mining systems in the world – based on 5 different synergistic algorithms. DGB adherents call the coin “The Sleeping Giant”.https://t.co/7MiWJ2tFfe

Coin of the day: Reddcoin (RDD) – a sleeper – most widely used social network coin in the world – flying under the radar since 2014. Working with every Social Media platform, it is the only currency that many children under the age of 10 have ever known.  https://t.co/ZN3jehwXp7

Touted by McAfee as the “only currency that many children under the age of 10 have ever known“, Reddcoin kicked off December 24th at just $0.01 USD, and then skyrocketed to $0.013. Shortly thereafter, Reddcoin rose to $0.02 USD on Christmas Day, and then saw a high of $0.029 USD on January 7th.

Coin of the day: Humaniq (HMQ). In the spirit of Christmas, there is no better coin. Their mission is true to the very purpose of crypto – to endow the disenfranchised. HMQ, an overlooked gem, is, in my opinion, the most undervalued coin in existence. https://t.co/1z3mGUk274

McAfee’s Christmas pick, Humaniq began trading at $0.4 USD, and then quickly rallied to a high of $0.6 USD on the same day.

Humaniq has struggled to reach similar levels since, and at press time trades at just $0.1 USD.

Coin Of The Day: pic.twitter.com/WSTXaha1Nk

Tron has enjoyed more press than most other cryptocurrencies McAfee has elected to espouse.

McAfee’s tweet had little impact on the cryptocurrency in hindsight – Tron began trading at $0.03 USD on December 26th,  and closed the day at $0.036.

Coin of the week; pic.twitter.com/ZWISkUX6Ok

Coin of the week: DOGE

The most famous quirky currency, Dogecoin began trading at $0.017 USD on January 8th, whereafter a selloff was triggered that brought values down to $0.015 USD.

Doge hasn’t reached a high point since then, and today trades at $0.003 USD.

Coin of the week: Lumen (XLM) – called Stellar by some – though Stellar is the name of the network that created the coins. One of the fastest and cheapest crypto transactions. Lumens facilitate the financing of Third World projects and is called by some “The next Bitcoin”.

Coin of the week: SYSCOIN (SYS). Blockchain Foundry, in partnership with Microsoft have provided a SYSCOIN wallet like no other. Creates a distributed and flexible on-line marketplace that enables co-operation alongside competition. Has encrypted messaging, aliases and more.

Opening at $0.65 USD on January 22nd, Syscoin rose to strength at $0.77 USD following McAfee’s tweet. Since then, the cryptocurrency came close to its past glory by touching $0.74 USD on February 21st, but today trades at $0.33 USD.

For clarity, John McAfee did not issue ‘Coin of the Day’ tweets as investment advice. Data was acquired from CoinMarketCap from the inception of McAfee’s tweet to date on June 7th. Special thanks to go to Theunis van Rensburg for his assistance.

EDIT: Revised Reddcoin’s return on investment. We regret the error.