Has New Zealand radio and television star Mike Hosking invested in Bitcoin through trading platforms? In this, we explore. 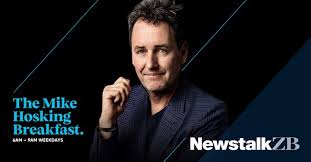 Michael Hosking, popular television and radio broadcaster has celebrated success in his industry bagging a wealthy net worth and a name for himself as a political and financial commenter. Hailing from New Zealand, his name has become linked with several Bitcoin trading platforms with rumours circulating that he has invested in the cryptocurrency Several media outlets suggest that he has used automatic trading platforms to trade and buy Bitcoin in order to add to his wealth. However, the validity of these rumours begs question. To find out whether Hosking has invested in Bitcoin, we investigated his public discourse and potential feasibilities of the rumours.

Has Mike Hosking invested in Bitcoin?

According to our research, we can confirm that the rumours of Mike Hosking investing in Bitcoin are false. Hosking has not invested in Bitcoin (unless privately which cannot be confirmed owing to Bitcoin’s anonymous nature) and the suggestions from media outlets to say that he has are false. The rumours sparked are likely as a result of media platforms attempting to make money from affiliate linking. Since Mike Hosking has a name and reputation with a following of fans, marketers will try to exploit the influence that he and other ‘Bitcoin celebrities have by spreading fake news of his investments. However, through searching his public commentary, there is no evidence to suggest that he has used Bitcoin trading platforms to invest in Bitcoin.

What is Mike Hosking’s net worth?

Mike Hosking boasts a net worth of approximately $2 million USD. He accrued this wealth from his successful career in radio and television. At present, he is the host of the Weekly Breakfast show on the radio station Newstalk ZB along with co-hosting the Seven Sharp show. His career in radio kicked off when he worked for the Radio New Zealand commercial network, where he hosted The Tonight Show. From there, he went on to co-host the Morning Report on National Radio. In 1997, he joined the TVNZ team until 2004 where he was fired from that television gig. He made his return to the silver screen four years later as a fill-in on TVNZ’s Close Up. Following that, he has hosted New Zealand’s Who Wants to Be a Millionaire? Because of his wealth and his reputation, the rumours of his trading have sparked.

What are automatic Bitcoin trading platforms?

Bitcoin trading platforms, such as Bitcoin Evolution, are designed to make trades on behalf of the user. With an initial deposit of $250 USD, users will invest in the cryptocurrency and the platform will make trades using data to turn a profit for the user passively. This is done by using historic data and market trends to develop an algorithm which makes automatic trades. According to reviews and research into automatic Bitcoin trading platforms, there is a 90% chance of making a profit with the initial investment. This is because the algorithmic method of trading reduces human error and a chance of making an emotional trade such as buying and falling to FOMO or selling out of fear of a bearish dip.

The benefits of automatic Bitcoin trading

One of the key benefits of trading through an automatic is that users do not have to constantly watch the market. As Bitcoin is a fairly volatile asset, trading manually requires consistent attention to what the market is doing. If the market surges quickly and an investor misses the chance to buy before, there is a wasted opportunity. This is not a risk with automatic trading platforms. As stated, another major benefit is that human error is reduced and emotional buying is not a concern.

However, it is worth noting that there is still a risk in trading involved too. Since cryptocurrency is a young asset, there is still uncertainty in the volatility and users face a risk versus reward when investing in the industry.