Global Bitcoin ATMs and how they help crypto adoption 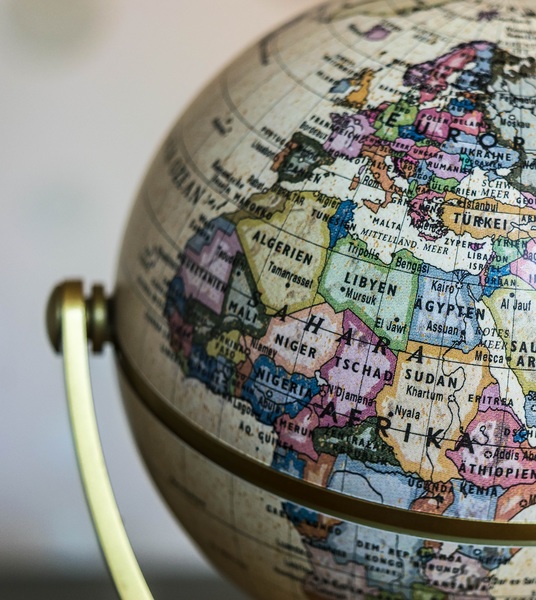 Announced by Ámbito, the first Bitcoin ATM in Uruguay was installed in Punta del Este. As a location that attracts tourists in the region,  Punta del Este caters to both locals and internationals. The machine has been fully funded by the government of Uruguay and was developed and installed by two companies in the region, URUBit, a token project created in Uruguay and deployed on Binance’s network, and inBierto, a cryptocurrency investment platform.

According to the CEO of inBierto, Adolfo Varela, the installation of the ATM will help protect local investors who want to make trades in the area without the risk of being scammed. Uruguay regulation does not accept cryptocurrency trading through any local banks, making the industry a peer-to-peer one in the country. He noted:

“Today in Uruguay cryptocurrency trading still cannot be banked due to a matter of regulation on the way, [traders need to rely on peer-to-peer trading]. People who want to enter the crypto world have to do it person by person looking for someone who can reliably offer the other pair to make a conversion. That has led to many scam situations and with these computers it is possible to avoid that and interact with a machine.”

Which cryptocurrencies are available on the Bitcoin ATM?

The machine launched in Uruguay will support the deposit and withdrawal of five cryptocurrencies at the moment. Bitcoin (BTC), Urubut (URUB), Ferret Token (FRT) – both of which are managed by the companies behind the project – Binance Coin (BNB), and Binance USD (BUSD). Ethereum is not supported currently because the machine is running on the Binance blockchain and the networks do not interact with one another.

Where are the cryptocurrency ATMs across the world found?

According to CoinATMRader, which tracks where cryptocurrency ATMs are installed and listed across the world, North America accounts for a massive portion of cryptocurrency ATMs, making up 94.9% of all ATMs. With just over 30500 machines, the United States makes up 87.8% of the Bitcoin ATMs in the world. Europe is the second largest continent holding 4% of all ATMs and Asia is the third continent with 0.7% of machines. 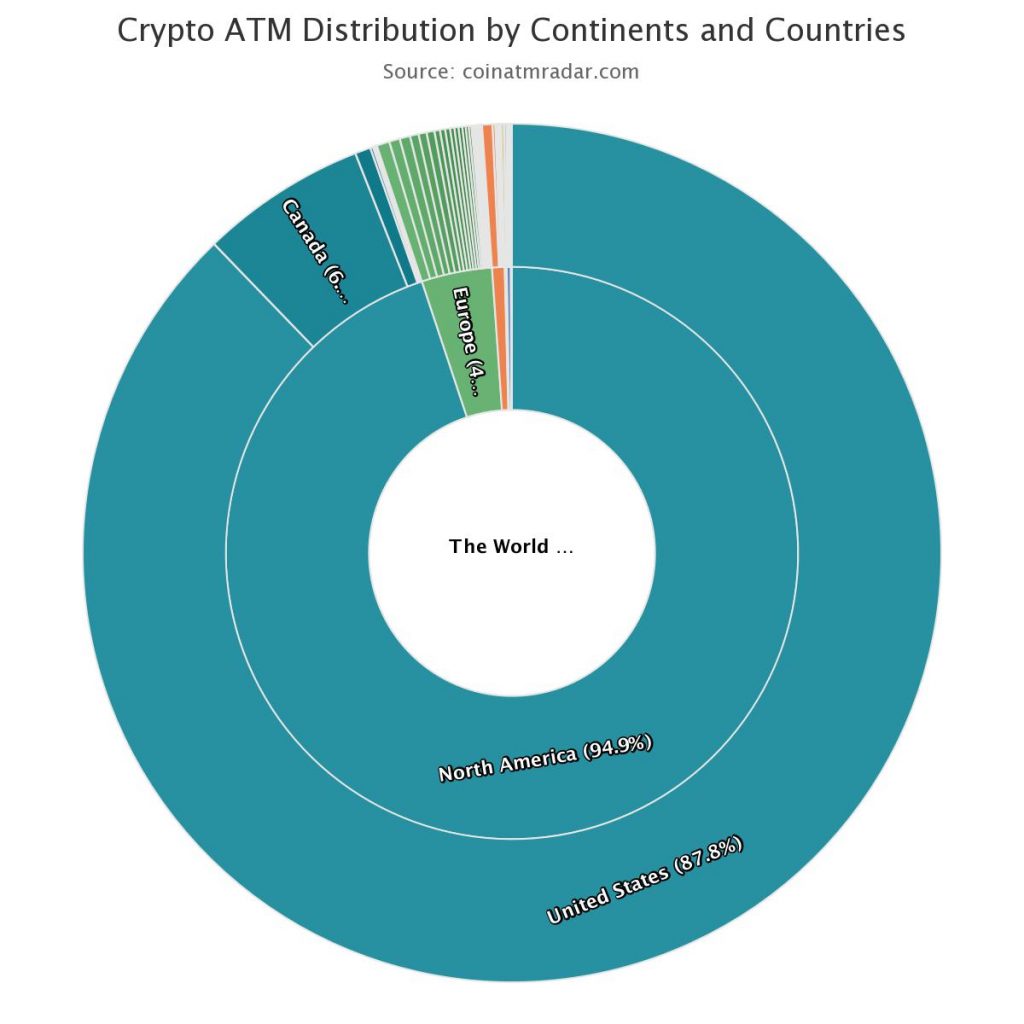 In South America, there are 79 cryptocurrency ATMs where traders can buy Bitcoin and other cryptocurrencies. Columbia leads this, with 31 crypto ATMs installed. 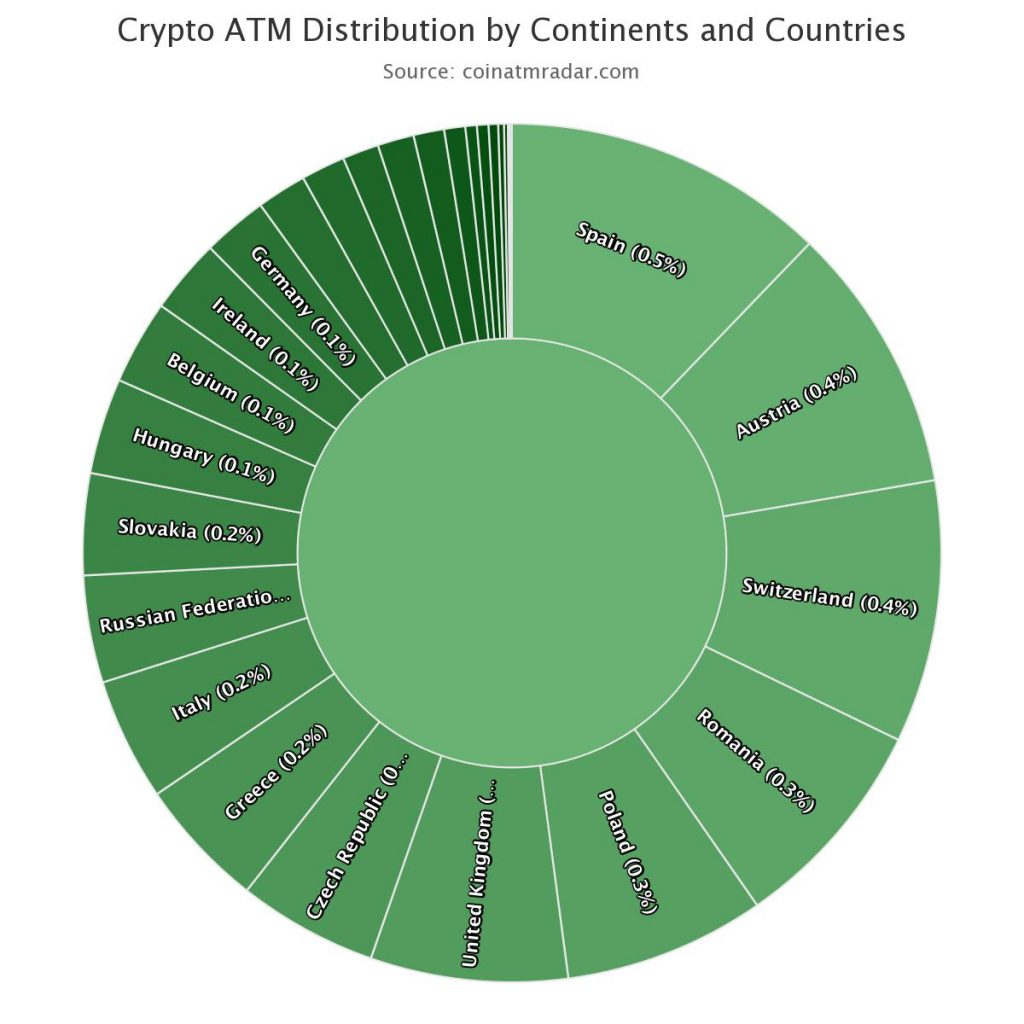 Bitcoin ATMs expanding across the world represents greater cryptocurrency adoption, especially ones which are the first in a country. The more machines that allow users to trade, buy and sell cryptocurrency means more security and scam-free investment in cryptocurrency. Along with regulation, the steps to introduce new users to cryptocurrency or make it easier for seasoned traders to engage with the industry play a significant role in wider spread adoption in the industry.