At the time of this writing, Bitcoin s price is $7,862.65 US dollars, down approximately 0.07% from the day prior. This is now the 2nd straight day that Bitcoin has headed down, and the coin’s prevailing trend over the past 14 days is down. Since it is somewhat far below relative to its 20-day average price of $8,795.798, prospective buyers may wish to wait for this gap to shorten a bit before jumping in. Alternatively, for those interested in trading ranges that Bitcoin bounces between, its current two-week trading range in US dollars is between $7,841.57 and $9,750.02. Its market capitalization currently is estimated to be around $148.15 billion US dollars, while it’s market dominance (percent of total crypto market) is estimated to be 66.46%. It should be noted, though, that Bitcoin’s dominance has been gradually moving down, reporting an average daily decline of 0.21% over the past 14 days. A decline in dominance may suggest a growing opportunity for investing in other coins, and as such, altcoins may constitute viable investment opportunities. 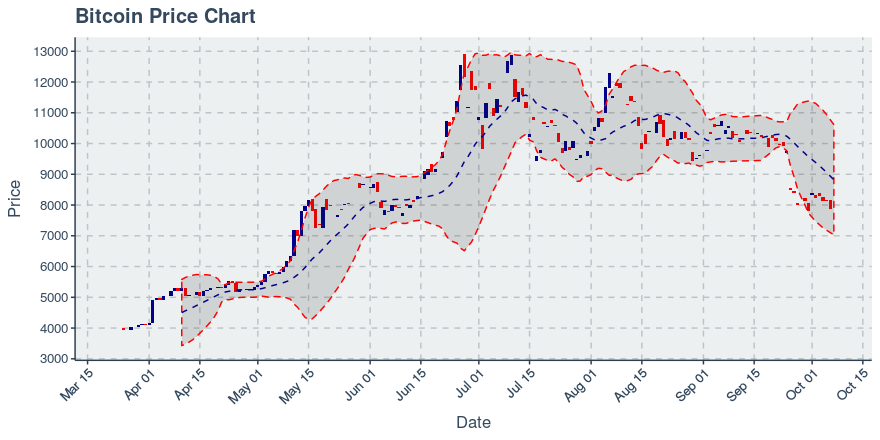 328,803 transactions were recorded on the Bitcoin blockchain yesterday. Regarding growth in actual usage of the blockchain for transactions, observe that over the past 7 days daily transactions have declined by about 0.5%, though it should be noted this past week the trend should be described as not clear — at least on a two-week basis. Ultimately, if the currency does not succeed in growing transactions on its chain, its primary utility may be as a form of savings. As for Bitcoin’s transaction fees, the average transaction fee yesterday was $0.47 US dollars. Transaction fees have been decreasing by approximately 4.22% per week, while the average transaction size is down 44.96% in US dollars. Last but certainly not least, Bitcoin’s hash rate continues to bounce around on a 30-day basis, rising about 0.15% per day. Given the unclear trend in bitcoin mining, it may be that hash rate is getting more uncertain in a way; this could result in the chain’s security being something to pay attention to. As such, this might not enable Bitcoin to attract more high-value transactions.

2.44% of the 576.49 million Bitcoin wallets holding a positive balance have transacted within the past 30 days. In terms of engagement, note that the number of monthly active users in Bitcoin has been bouncing by about 768.6813 per day. In terms of ownership concentration, approximately 90.35% of the outstanding Bitcoin is owned by just 1% of the wallets with a positive balance.