Bitcoin is up about 4.89% from the previous day, putting its price at $8,503.31 US dollars at the time of this writing. The up day for Bitcoin yesterday was a reversal from the day before it. Price now stands at 11.63% above its 20-day moving average, and over the past two weeks, the price has been in an uptrend. On the other hand, if you are a rangebound trader seeking a range for Bitcoin to bounce between, you might find a lower boundary at $6,723.68 USD and an upper boundary at $8,510.82 USD. In terms of its overall importance in the cryptocurrency market, Bitcoin’s current market capitalization is $156.72 billion US dollars, which is about 66.32% of the market capitalization of all cryptocurrencies Bitcoin’s dominance level has been without a clear trend over the past two weeks, fluctuating between 66.32% and 69.22%. A dominance level without a clear trend suggests that it may still be unclear as to whether or not we will live in a world with many viable coins, or whether Bitcoin will be the “one coin to rule them all”. 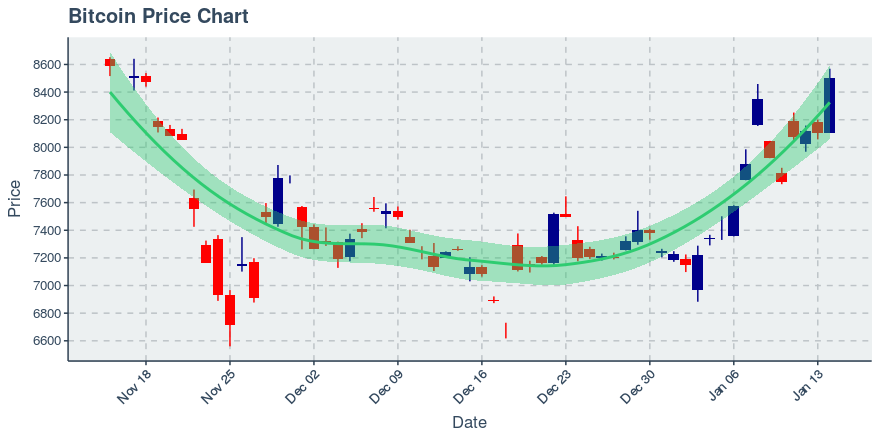 346,953 transactions were added to the Bitcoin blockchain in the previous day. The trend in daily transactions is clear; to wit, transactions have risen by about 5.74% over the past week. Bitcoin may end up functioning as money for buying certain goods/services if it does regularly increase the number of daily transactions occurring on its chain. In terms of transaction fees, the average cost for sending Bitcoin yesterday ended up being approximately $0.48 US dollars. The average transaction fee has been decreasing at a rate of about 3.97% per week, but the average amount of money sent in transactions, in US dollars, is down 9.02% week over week. In terms of how much computing power Bitcoin is using, over the past 30 days its hash rate has continued to trend upwards, ultimately rising daily by approximately 0.42%. Ultimately, the security of Bitcoin is improving, because the hash rate trend is upwards — which implies the trend in mining strength is now more competitive. From this perspective, this behaviour may provide Bitcoin with the ability to attract more high-value transactions.