Bitcoin flat for the day, as consolidation around 20-day average and $10,000 price level continues

Bitcoin s price at the moment is clocking in at $10,362.5, which means that since yesterday, it is down about 0.03%. This is the 2nd consecutive day that Bitcoin has moved down, but the coin’s trend over the past two weeks is unclear. As price is currently close above its 20-day average price of $10,162.34, we may interpret that to mean staying above the 20-day moving average may be important in terms of sustaining short-term momentum. On the other hand, if you are a rangebound trader seeking a range for Bitcoin to bounce between, you might find a lower boundary at $9,676.59 USD and an upper boundary at $10,648.09 USD. The currency’s market cap is now at $184.93 billion US dollars, and its market dominance — the percent of the entire amount of capital invested in cryptocurrencies that belong to Bitcoin — is at 69.14%. As for the recent behaviour, Bitcoin’s dominance level hasn’t exhibited a clear trend — but has fluctuated between 69.14% and 70.84%. A dominance level without a clear trend suggests that it may still be unclear as to whether or not we will live in a world with many viable coins, or whether Bitcoin will be the “one coin to rule them all”. 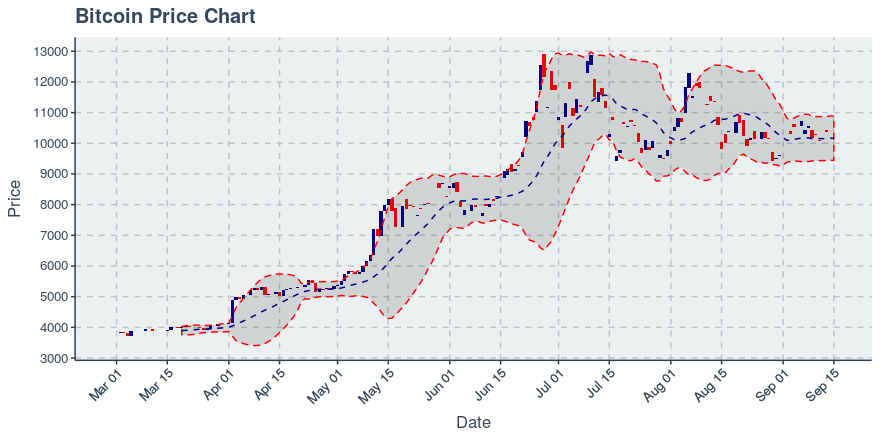 274,146 transactions were added to the Bitcoin blockchain in the previous day. The trend in daily transactions is not clear, though it should be noted that transactions have declined by about 5.54% over the past week. Ultimately, if the currency does not succeed in growing transactions on its chain, its primary utility may be as money to protect against political turmoil. Yesterday, Bitcoin’s average fee per transaction came in at $0.72. The average transaction fee has been decreasing at a rate of about 5.68% per week, but the average amount of money sent in transactions, in US dollars, is down 12.98% week over week. In terms of how much computing power Bitcoin is using, over the past 30 days its hash rate has continued to trend upwards, ultimately growing daily by approximately 0.88%. A trend in hash rate that upwards suggests that mining is becoming more computationally difficult and that the chain is thus improving. From this perspective, this behaviour may provide Bitcoin with the ability to earn greater trust from developers and investors alike.

Over the past 30 days, 2.44% of the 568.3 million Bitcoin wallets holding a balance reported a transaction. It should be noted that over the past two weeks, the number of monthly active users of Bitcoin has been falling by about 12,877.92 per day. Over 90.42% of the outstanding Bitcoin is held by the top 1% of Bitcoin wallets.