Bitcoin down 1.41% from prior day, dominance continues to grow, reaching near 70%

At the time of this writing, Bitcoin s price is $11,813.98 US dollars, down approximately 1.41% from the day prior. The down day for Bitcoin yesterday was a reversal from the day before it. Price now stands at 12.53% above its 20 day moving average, and over the past two weeks, price has been in an up trend. Given that its distance from its 20 day moving average of $10,498.39 is somewhat far, it may mean that as such, dip buyers may need to wait a bit more for an opportunity. On the other hand, if you are a rangebound trader seeking a range for Bitcoin to bounce between, you might find a lower boundary at $8,637.45 USD and an upper boundary at $12,359.32 USD. In terms of its overall importance in the cryptocurrency market, Bitcoin’s current market capitalization is $211.14 billion US dollars, which is about 68.83% of the market capitalization of all cryptocurrencies Bitcoin’s dominance has been trending up slowly, averaging a gain of 0.56% each day over the past two weeks. A gain in dominance may suggest cryptocurrency activity is consolidating on the Bitcoin blockchain, and that Bitcoin’s chances for long-term survival are thus enhanced. 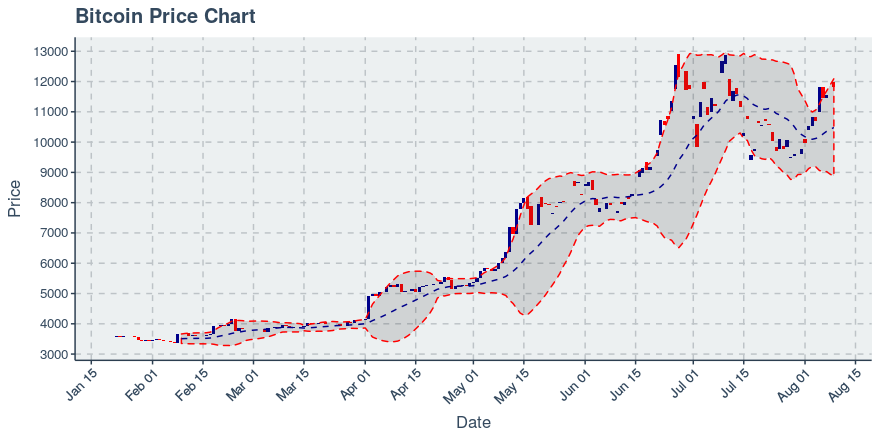 Yesterday, the Bitcoin blockchain saw 336,181 transactions recorded on it. Daily transactions recorded on the Bitcoin blockchain grown by approximately 6.92% this past week; to wit, the trend is clear at this time. Bitcoin may end up functioning as a currency for transactions if it does regularly increase the number of daily transactions occurring on its chain. Yesterday, Bitcoin’s average fee per transaction came in at $2.23. The average transaction fee has been growing at a rate of about 0.22% per week, but the average amount of money sent in transactions, in US dollars, is down 11.23% week over week. Last but certainly not least, Bitcoin’s hash rate continues to trend upwards on a 30 day basis, gaining about 0.68% per day. Given the upwards trend in bitcoin mining, it may be that hash rate is getting more intensive; this could result in the chain’s security improving. As such, this might enable Bitcoin to earn greater trust from developers and investors alike.