Bitcoin Bounces Back, Climbes Back Above $7,000 and Nears its 20 Day Average

At the time of this writing, Bitcoin s price is $7,159.26 US dollars, up approximately 7.95% from the day prior. The up day for Bitcoin yesterday was a reversal from the day before it. Price now stands at 1.49% below its 20-day moving average, and over the past two weeks, price has been in a downtrend. On the flip side, for those who prefer a rangebound view when trading, Bitcoin’s trading range — based on its momentum and volatility over the past two weeks — is between $6,764.13 and $7,771.55 (in US dollars). The currency’s market cap is now at $129.32 billion US dollars, and its market dominance — the percent of the entire amount of capital invested in cryptocurrencies that belong to Bitcoin — is at 68.41%. It may be worth paying attention to the trend in Bitcoin’s dominance; the currency’s dominance has been going up slowly, as it has reported an average daily upward move of 0.15% the past two weeks. An upward move in dominance may suggest cryptocurrency activity is consolidating on the Bitcoin blockchain, and that Bitcoin’s chances for long-term survival are thus enhanced. 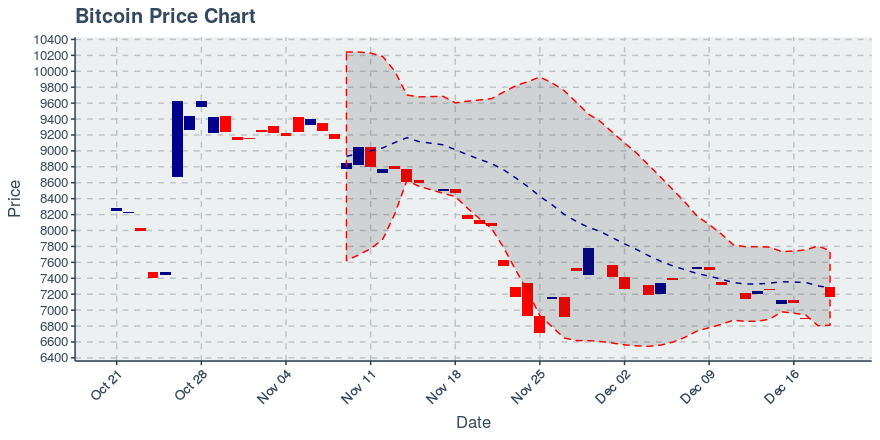 Yesterday, the Bitcoin blockchain saw 319,555 transactions recorded on it. Daily transactions recorded on the Bitcoin blockchain jumped by approximately 2.07% this past week, though it should be noted the trend is not clear at this time. If Bitcoin does regularly grow transactions, it may need to derive its value as money for buying certain goods/services. In terms of transaction fees, the average cost for sending Bitcoin yesterday ended up being approximately $0.48 US dollars. The average transaction fee has been declining at a rate of about 3.97% per week, but the average amount of money sent in transactions, in US dollars, is down 9.02% week over week. In terms of how much computing power Bitcoin is using, over the past 30 days its hash rate has continued to bounce around, ultimately gaining daily by approximately 0.12%. Ultimately, the security of Bitcoin is being a point to bear in mind, because the hash rate trend is unclear — which implies the trend in mining strength is now harder to interpret. As such, this might not enable Bitcoin to earn greater trust from developers and investors alike.