Green in a sea of red: Binance Coin is hitting nearly 10% increases

Now the 13th most valuable cryptocurrency, BNB trades for $6.06 USD today, and bears a total market cap of $792,447,995 USD. For investors holding bags since last month, that development marks a 70% decline. Similarly, the market cap has diminished by approximately 61% .

Although the token is facing a decline over the month in value and market cap, it has climbed the ranks by more than double its position. Currently, the token has also seen 9.44% increase in day-on-day trading. 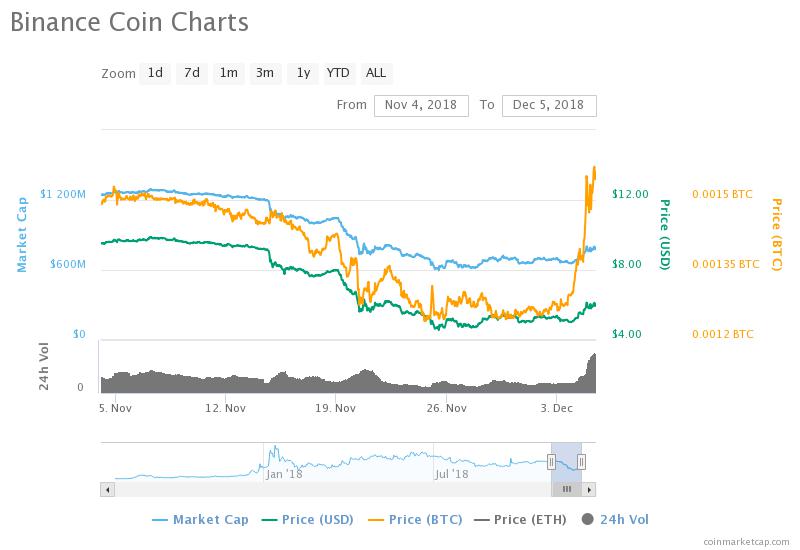 What is Binance Coin?

Since its launch midway through last year, Binance has quickly become one of most popular cryptocurrency trading exchanges

Prior to the platform going live, the exchange gathered funding in order to launch the platform as successfully as possible and held an initial coin offering (ICO) as a means to raise the funds. BNB – the token for the coin offering – was instrumental in the ICO and now, after the launch, it operates for other reasons.

As an ERC-20 token, BNB functions using Ethereum’s blockchain and is kept to the standard that is held to all tokens on the network. BNB’s main function is as a payment structure for the exchange, whereby users can pay for costs such as trading fees on the platform which, for the first year of the token’s implementation, came with a 50% discount on all trades.

The most important function of BNB is to offer as a payments method on the exchange, meaning that users of the platform can pay for services such as trading fees using the token and (for the first year after the coin was launched) this came with a 50% discount on all trades. Binance has also set up notable partnerships, such as Monaco – a company which offers mobile a payments platform for cryptocurrencies – and the BNB token can be used on the company’s  Visa Card or mobile app, as well as Uplive – a decentralized gifting site – and BNB can be used to pay for virtual gifts on the website.