As represented by charts by analytics and data tracking platform Bitcoin transaction average value has increased by almost $50,000 USD; increasing from $105,000 USD.

Why are Bitcoin trades increasing so dramatically?

There are a number of factors which could be pointing towards the significant surge in Bitcoin’s average transaction value. Most likely is that Bitcoin whales and institutional investors are adding more cryptocurrency to their portfolios. This is highlighted by the facts that data collated shows that institutional investors like Grayscale and Microstrategy are consistently buying more Bitcoin. By the end of last month, Grayscale had more than 2.4% of the Bitcoin currently in circulation, holding more than 450,000 Bitcoin.

The number of new active addresses has not shown significant increases, according to data from BitInfoCharts, shifting between 650,000 and 970,000 active wallets between July and October. With no major spikes recently, this implies that the massive increase in average trades is not owing to significant quantities of new investors entering the market.

Despite the dip in September, Bitcoin price has been steadily increased since July, ranging between just below $9,000 USD and above $12,000 USD. While the market has seen massive increases in average transaction values, the price of Bitcoin has not seen a significant spike to correlate. 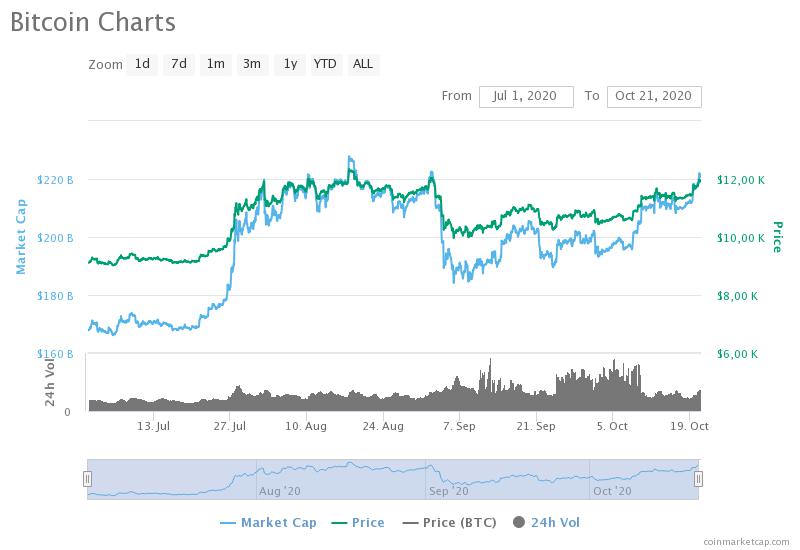 While the market might not be showing volatility – in either direction – sentiment surrounding the cryptocurrency is positive. Experts, analysts and investors are mostly bullish, predicting a rally within the next year as a result of the weaker economy from the global pandemic as well as the recent Bitcoin halving.